How to Choose your SkyWeather2 Kit

Check out the buyers guide here.

Earthquakes!   If you have ever been in one, they are a shaking experience! AfterShock measures how strong the earthquake was at your location by measuring the shaking of the earth right at home.   Local! Local! Local!


This kit is easy to build and requires NO SOLDERING!   Great for your home, cabin or classroom.
The WeatherSense AfterShock Sensor is the latest in the SwitchDoc Labs line of Solar Powered 433MHz environmental sensors designed to hook up with your Raspberry Pi.    AfterShock is a seismic sensor which is different than a seismograph and is much less expensive.   AfterShock is designed to pick up earthquakes that could potentially damage your home, equipment or business.   It does not continuously report earth movement (such as caused by trucks or people walking), but only reports earth movement that AfterShock determines looks like an earthquake.


AfterShock uses a sophisticated algorithm to detect whether an earthquake has occurred  at your location and reports back how strong the earthquake (at your local location!) was using the SI (Seismic Instensity) Scale to your Raspberry Pi!
Comes with great open source software for the Rapsberry Pi!  All of this  great data is saved by your Raspberry Pi receiving this data using a sophisticated Software Defined Radio (SDR).   More coolness.   And these are solar powered!  No messy power cords. No plugs. Hang it up in a tree!   Oooo.  And all that wonderful solar power data (solar panels, battery and computer power) are sent back to your Pi too!   More Data!  More Cowbell!  These units will transmit about 100m (~300ft) depending on what you have between the unit and your receiver.  You can always add a bigger antenna however!
At SwitchDoc Labs, we believe in providing projects that generate great data and great learning experiences.   With the WeatherSense products, you build the units, learn how they work and then you can modify them with all the software being Open Source!


What is in the AfterShock Kit?

Solar Powered Wireless WeatherSense AfterShock Earthquake Sensor
This is the complete kit for the Wireless AfterShock Sensor. Add on extras include a SDR (Software Defined Radio) for your Raspberry Pi, a 3D Print and pre-loaded SD Card. Raspberry Pi is not included.   A 3.7V LiPo Battery is not included.
The AQI Sensor Kit contains: 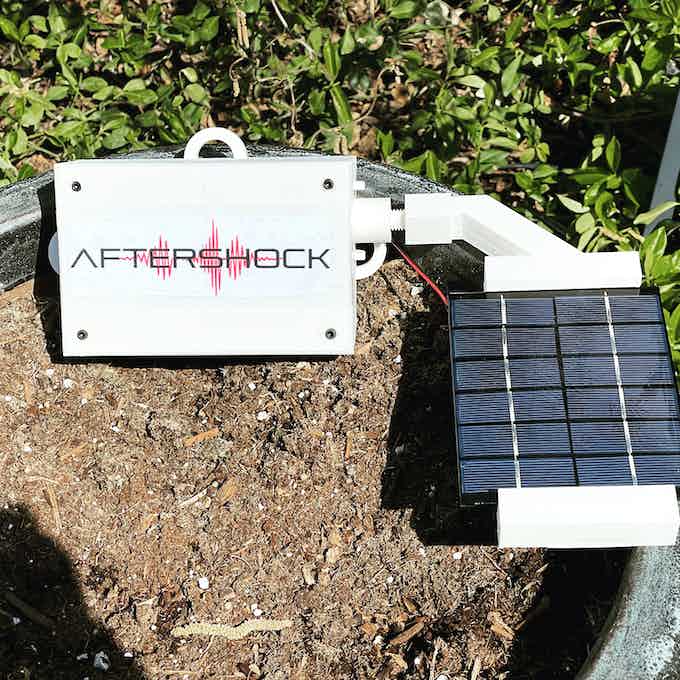 These WeatherSense Sensors are 100% compatible with SkyWeather2.
We installed our first beta version on the San Andreas Fault in Palm Springs.  No Kidding!  No Earthquakes yet!  But we can tell when the Pool Pumps come on!

WeatherSense is a set of open source protocols and wireless  weather / environmental sensors for use with the Raspberry Pi.   You can see and modify the software to do what you like and tie it all into the SkyWeather2 Weather Station.  Or write your own!

What Can I do with AfterShock in the Classroom?

Build your AfterShock box and before you mount it outside, have your students shake it and see the results on the Pi after two minutes.  Build a buildling out of blocks, and then shake it until it falls down with the sensor inside.   You will read the strength of your earthquake!!  You can also mount the box on a wire or a sensitive structure and you can measure people walking, hitting a table or other things.   During development, we could even pick up Dr. Shovic sitting his coffee cup down.   He also spilled coffee all over the prototype, but that is another story.......

What else do you need to use this kit?

What does AfterShock Measure?

AfterShock measures how much the ground is shaking at your location.   It estimates how much damage could be done at your house, cabin or apartment.  Whether you are there or not.   It measures two main things:   How far the earth was moving (in meters/second) and how fast it was moving (along all three x,y, and z axes!) - acceleration (meters/second**2).
AfterShock stores the information and also transmits the information via a wireless 433MHz link to your Raspberry Pi.  If you lose power, no problem!  AfterShock remembers the last earthquake and will transmit it every hour so when you Pi comes back on line, your Raspberry Pi can pick up and record the values.

What is the Seismic Intensity Scale of Japan (SI)?

The Japan Meteorological Agency (JMA) Seismic Intensity Scale (k is a seismic intensity scale used in Japan to categorize the intensity of local ground shaking caused by earthquakes.
Intensities are expressed as numerical values called seismic intensity  (called shindo (震度) in Japan); the higher the value, the more intense the shaking. Values are derived from peak ground acceleration and duration of the shaking.
The spectral intensity (SI) equivalent to the magnitude of the destructive energy imposed by seismic motion on structures.
The SI value, which is the average value of the integrated velocity response spectrum, is an index that expresses the destructive force of seismic motion and is highly correlated with the damage to structures.
Below is a chart of the local effects of earthquakes using the SI values that you get from AfterShock.

What is the Difference between SI and the Momement Magnitude or the Richter Scale?

SI should not be confused with magnitude  measurements like the moment magnitude (Mw) and the earlier Richter scales, which represent how much energy an earthquake releases. Much like the Mercalli scale, the SI scheme quantifies how much ground-surface shaking takes place at measurement sites distributed throughout an affected area.
Mw and the older Richter scale are measurements of how strong the earthquake was at the epicenter of the earthquakewhich AfterShock measures how strong the earthquake is at your location.
How Sensitive is AfterShock and how can I test it?
How sensitive is the AfterShock sensor?  Depends on how you mount it.  Down on the ground or on a solid tree or post?  It will mostly respond to significant earthquakes.  That's how you want to install it.    You can detect other things (walking, coffee cups, trucks) by mounting on other types of things.  Experiment!  That's the whole point!
Testing is easy. Pick the box up and drop it or tilt it.  2 minutes later, you will have the data on your Raspberry Pi.

What is a Software Defined Radio?


A Software-defined radio (SDR) is a radio communication system where components that have been traditionally implemented in hardware (e.g. mixers, filters, amplifiers, modulators/demodulators, detectors, etc.) are instead implemented by means of software on a personal computer or embedded system (still with significant hardware support.)


The SDR we are using with WeatherSense is based on the powerful RTL2832U and R820T tuner, it can tune into signals from 24MHz to 1850MHz.    SwitchDoc Labs has written drivers for the WeatherSense sensors and supplies the drivers to the community open source.   These are all available in a pre-built SD Card image.

But wait!  There is more.   The Wireless WeatherSense kits come with a full set of open source software for your Raspberry Pi.   You can download the software from github.com/switchdoclabs, download the included link to a SD Card Image or add-on a pre-formatted SD Card with all these goodies already on the card for a simpler experience.

The Heart of AfterShock

The CPU at the heart of these sensors is a 16MHz Arduino Pro Mini Low Power compatible CPU that has all the necessary connectors and hardware to keep the sensors running smoothly.


We provide STL files (and the 360 Fusion Design Files)  for AfterShock projects. Don't have a 3D Printer?   You can find them here.

SkyWeather2 is a full blown DIY weather staiton.  You can find it here.

"The AfterShock Earthquake detector is one of the most fun projects that we have ever put together.   We got to build on the hardware and technology we developed for the Air Quality and Lightning Detector WeatherSense sensors and develop a board based on the D7S from Omron, a very cool Japanese company."
The AfterShock Earthquake detector works by using a 3 axis accelerometer to detect an movement in the X, Y and Z axis.  It records any movement in these directions and then puts the resulting signals through a sophisticated algorithm to determine whether this was an earthquake or just noise.


As you can see from the below graph, there is a very high correlation between actual ground movements and what AfterShock detects.
Use left/right arrows to navigate the slideshow or swipe left/right if using a mobile device